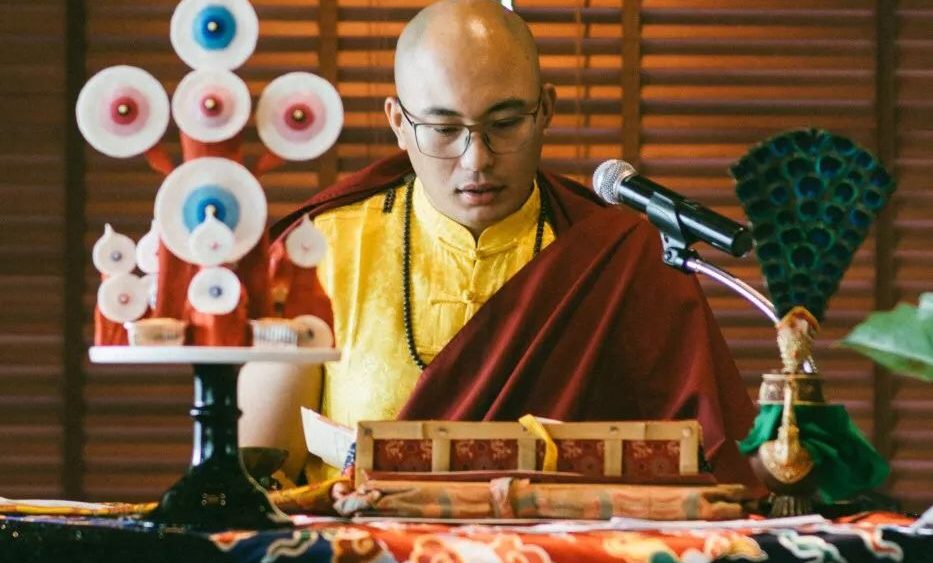 Kalu Rinpoche | The Reason to Practice the Six-Armed Mahakala

Q: What is the reason to practice the six-armed Mahakala?

A: It is because six-armed Mahakala is the manifestation of Avalokitesvara. That’s number one. Number two is six-armed Mahakala is inseparable between guru yoga practice, is not just a protector, is a guru yoga practice. And it is also considered as a Yidam practice, not just protector. And also it’s considered as the liberator during the time of death, during the time of bardo as well, protector of next life as well, and the one who is very rapid in terms of blessing and so on.

Q: Concerning about the bardo, does the protector come after the 49 days?

A: No. That’s the whole point. Bardo, the definition of the bardo, it means that, during the first 49 days, in a stage of between the next life and being deceased and then roaming around in the bardo stage. First without realizing that you have deceased. And the second is that having immense pain when you realize that you can no longer communicate. And then the third is entering to the next life. Next life doesn’t mean always human being. It always comes in different form.

So, if the six-armed Mahakala comes on the 49th day, then it’s little bit too late. It means that you already suffered more than enough.

The whole point is, liberator from the bardo, it means the moment you have passed away, like, when we passed away, the human body element, the fire, earth, and water, all of the elements dissolves, and then they will be blacked out. And once there’s a blackout and then there is a mother nature. You know what is that Mother Nature? There’s a different nature of mind that you see it. And then also, if you are genuine practitioner, then you can recognize, you can say, ” Ah! that is the nature of the mind that I recognize before.” And if you are able to connect these two, then you no longer need the six-armed Mahakala. But many of us will fail. I’m not saying you will, or anybody. But the point is that after that and the bardo stage enters, so the liberator of the bardo means before the 49 days, before any suffering starts.

Eventually all of us will be enlightened, right? So what’s the point of being Buddhist? You can ask that kind of a question. If the six-armed Mahakala comes on the 49th days or 45th day, you already suffer more than enough. You realize you have died and you’ve realized that you can no longer communicate with your loved ones. Every reflection you have in your state of mind, and you are already born there, and being there, and you are not always in one place. And that has tremendous suffering. So if you’re suffering all this time, and then entering to your who knows what kind of next life and then if six-armed Mahakala appear at that time, then, what’s the point?

The very purpose of the six-armed Mahakala that we say that liberator during the time of bardo means the beginning stage. When you are still trying to explore, being in a state of the consciousness.