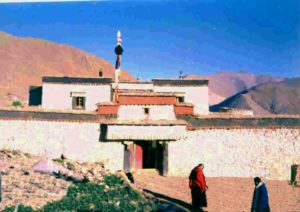 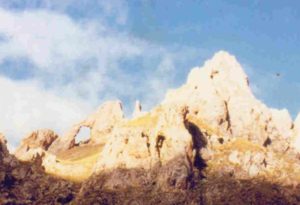 Khyungpo Naljor was born in a year of the tiger in the southern part of Tibet, into a distinguished family. The clan of the Khyung, or Garuda, the legendary great bird that is guardian of the north. His father’s name was Khyungpo Chujar, and his mother’s, Tashi. Thus, his own name meant “the Yogin of the Garuda clan.” A portent marked his birth: The great Mahasiddha Amogha came flying through the air from India and made the prophecy that this newborn child, who was already highly realized, would in time come to India and there receive the profound transmissions that would make him a greater guide of beings. The qualities of Khyungpo Naljor began to manifest while he was still very young. When he was five years old, he told detailed stories about his past existences, and revealed insight into his lives to come, and into the future in general. By the age of ten he excelled in reading, writing, arithmetic and both Chinese and Indian astrology. At twelve, in accordance with the tradition on his father’s side of the family, he studied the Bon teachings.

Later on he practiced Dzogchen, and finally, Mahamudra. Then, taking jewels and gold dust to present as offering, he left for India and Nepal in search of teachings during his journeys Khyungpo Naljor was unconcerned about comforts for himself and endured much hardship. Over the course of seven journeys, he studied with a hundred and fifty sages and fifty great adepts. He adopted four of his teachers as his glorious Root Lamas, of these; the wisdom Dakini’s Niguma and Sukhasiddi had received direct transmissions from Vajradhara the enlightened enjoyment body of the sixth Buddha. They took delight in Khyungpo Naljor and granted him the ultimate oral instructions that cut off all distractions and practiced single-pointed.

All doubts were allayed and he obtained both extraordinary and common Siddhis. Khyungpo Naljor established his monastic seat in Shang–which is how the lineage got its name Shangpa. He passed away in 1139, at the age of 150.