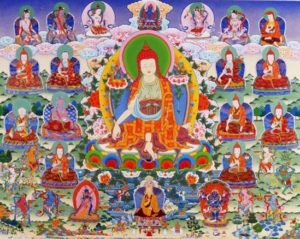 The Shangpa lineage is often referred to as the ´secret lineage´ because Niguma instructed Khyungpo Naljor to transmit the teachings to only one student for the first seven generations (beginning with the Buddha Vajradhara and Niguma).

From Gyalse Mok Chokpa, the lineage was passed to Kyergang Chokyi Senge (Kyergangpa) , Nyentön Rigung Chökyi Sherab (Rigongpa), and Sangye Töngpa. The first seven masters are known as the Seven Great Jewels of the Shangpa tradition. Sangye Töngpa was the first teacher who gave these instructions to more than one of his disciples, and from this point on, several different lines of transmission developed. The intention for keeping the lineage secret in this fashion was to protect it from becoming an established monastic tradition.

As one of the more esoteric traditions, it was meant to be practiced rather than codified.