His Eminence the 2nd Kalu Rinpoche 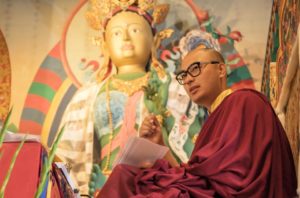 Through the noble intentions of His Eminence Kyabje Kalu Rinpoche, his incarnation Yangsi Kalu Rinpoche was born September 17 1990, during the monthly fulfillment offerings to the special Shangpa Kagyu Protector the 6-armed Mahakala at his previous home, Samdrub Darjay Choling Monastery in Sonada, India. Many auspicious signs accompanied the birth of His Eminence Kalu Rinpoche, as his Monastery was covered with a canopy of rainbows identical to the rainbows that had appeared above the monastery after Kabje Kalu Rinpoche Paranivana. Venerable Bokar Rinpoche has said, “That the Venerable Kalu Rinpoche chose to be reborn at his previous home, at his own monastery Samdrup Darjay Choling is an indication of his complete freedom of mind”. Many faithful patrons, disciples and students of his previous incarnation who visited the holy child have felt unusually joyful, both physically and mentally, upon simply seeing his face. From that moment, his previous disciples and students, near and far spread the news: “The Supreme reincarnation of our spiritual master has been born!”

His Eminence Kalu Rinpoche was invited in July of 1992, to visit the Buddhist meditation centers founded in France by his previous incarnation, his disciples and many others who met him for the first time were amazed and moved to faith by his amazing presence. In December of 1992, he made his first pilgrimage to the supreme sacred place, Bodhgaya India, the place where Shakyamuni Buddha achieved enlightenment, to attend the Kagyu Monlam.

Although still very young, he attended daily the great gathering of monks to recite The Aspirations of the Bodhisattva Samantabhadra performed prostrations and made offerings to the representations of the Buddha’s body, speech and mind of the Buddha. Yangsi Kalu Rinpoche played the ritual hand drum and bell proficiently at the head of the assembly demonstration to all his understanding of sacred rituals. Young Yangsi gave gifts to the beggars there without having been taught to do so and his natural pleasure in doing these benevolent acts astonished everyone and led all to feel great faith in him.

In July of 1992, the new incarnation was invited to visit His Dharma Centers in France. There his disciples along with many new people who met him were moved by the young Tulku’s presence. In december of 1992 Yangsi Kalu Rinpoche made his first pilgrimage to Bodhgaya. Although still very young he attended the daily great gathering to recite Aspiration Prayers, make prostrations and make offerings to the Buddha’s body speech and mind. The young Kalu Rinpoche gave spontaneous gifts to the beggars with out being instructed to do so which inspired disciples around him with great faith.

On February 28, 1993, His Eminence Kalu Rinpoche was enthroned at Samdrup Darjay Choling Monastery in Sonada at a profound ceremony of investiture. The 14th Chamgon Tai Situ Rinpoche and Gyaltsap Rinpoche presided over the ceremony, assisted by Kabje Kalu Rinpoche’s heart-son, Bokar Rinpoche. Tai Situ Rinpoche performed the hair-cutting ceremony and bestowed on the young incarnation the name Karma Ngedön Tenpay Gyaltsen; Victory Banner of the Teachings of the True Meaning. 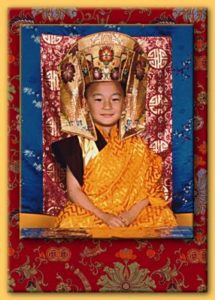 His Parents took him to Tibet when he was 3 years old to meet His Holiness the 17th Karmapa. In June of 1995, His Eminence Kalu Rinpoche made his first worldwide tour accompanied by his parents and the Venerable Bokar Rinpoche. Young His Eminence Kalu Rinpoche inspired everyone who met him on this tour with his gentle and loving presence, which displayed the qualities of a true Bodhisattva. His interest in meditation, chanting, calligraphy and the traditional musical instruments revealed his deep affinity for Dharma activity. 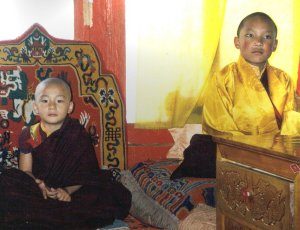 His greatest joy was found in playing the various ritual musical instruments, such as ra-gung (long horns) and gya-ling (short horns). With his gentle and loving nature he naturally comported himself in a manner surpassing the behavior of other children and his character revealed peacefulness, discipline and complete fearlessness.

When His Eminence Kalu Rinpoche was seven years old he journeyed with his parents to attend the yearly ten day Kagyu Monlam Prayer Gathering in Bodhgaya. Everyone enjoyed the Monlam Gathering and Lama Gyaltsen his Father made many offerings and participated in the Monlam every day. His Eminence with his mother and father then returned to Droden Kunchab Chodey Tashi Gomang Stupa in Salugara together after the Monlam and shortly after his Father Lama Gyaltsen suddenly passed away. After this sad event Young Kalu Rinpoche asked that he be allowed to go to Bokar Monastery to begin his formal studies. 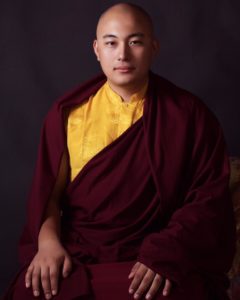 We are indeed extremely grateful to His Eminence Kalu Rinpoche whose sole purpose in life is to bring benefit to all beings and who through his commitments and diligence to continue unbroken the precious transmissions of the Shangpa and Karma Kagyu lineages, ensuring that the precious teachings remain available to those who seek to walk upon the blessed Path to Liberation.