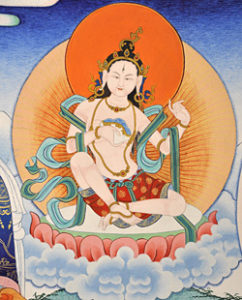 Sukhasiddhi was born in Western Kashmir and was a wife and mother of three sons and three daughters. Sukhasiddhi was a kind and generous lady and would give what she had to those who were more destitute. One day when the family had only one pot of rice left to eat her family went in different directions in search of food, leaving Sukhasiddhi alone at home.

When a more destitute man knocked upon her door begging for food Sukhasiddhi offered him the only food the family had. When her husband and children came back without having found any food to eat and learned that Sukhasiddhi had given the last of their food to the beggar she was chased out of her house because of her generosity. Sukhasiddhi left Kashmir and headed west for Uddiyana where it was said that all the men were Dakas and all the women were Dakinis.

Upon arriving there she obtained a bag of rice and became a beer merchant. A yogini came every day to buy beer from Sukhasiddhi for her master and Sukhasiddhi asked her whom are you taking this beer to? The yogini answered to the Great Yogi Virupa who lives in the forest. Sukhasiddhi then said let me give you my best beer, and please I don’t want any payment.

When Virupa learned of this he sent for Sukhasiddi and gave her the four complete empowerments for the yogic practices as well as the secret practices of the generation and completion stages. She became a Wisdom Dakini just after receiving the empowerments. Through the power of her realizations her body was thoroughly purified and transformed into a rainbow body.